6 Public art installations from the streets of Sydney


Sydney is a lovely city. It has beautiful public art installations across the city. Taking a walk along the streets  is the best way to explore any city. I try to walk as much as possible in all the new places to feel the place. Sydney being one of the best cities to walk due its perfect footpaths, provides more reasons to take a walk and it is all worth it. I never got tired walking on the streets of Sydney.
A few  art installations which were intriguing are here for you. There is a story behind each of these pieces. These interesting installations made me to stop and take pictures.

A small alley in Angel place, opens up to sky with number of cages suspended and birds chirping. It was such a fabulous sight. There was queue of couples posing for wedding photography. A great framework for a memorable picture. 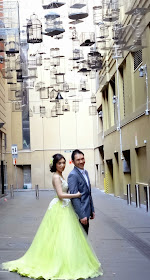 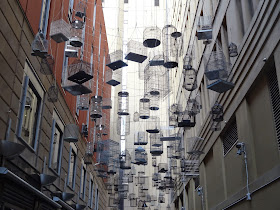 As we move closer to him he says, "Hello, my name is Islay. I was once the companion of the great Queen Victoria. Because of the many good deeds I have done for deaf and blind children, I have been given the power of speech!!". Apparently Queen Victoria was fond of her dog, Islay. On his memory this bronze sculpture is installed in  front of the famous QVB building  with motion sensors. He asks us to pay him money.It was so funny that when he was alive he was begging for biscuits now he begs for coin to help blind and  deaf children.

Staue of wild boar stands outside the  Sydney Hospital. Apparently it is the copy of one in Florence. It is believed that if we rub his snout, it brings luck. I don’t know how many were lucky after rubbing his snout, but certainly almost everyone one will try. Snout color will certainly speaks of number of rubbings.  We need to make small donation towards the hospital before we rub his snout.

A business man reading newspaper is a statue by J Steward Johnson by name Waiting. It is located in front of Australia square building.

When I was in Sydney in April, there were Rhino sculptures all over Sydney.Each one was different from the other. It was an initiative taken by Tarong Zoo to raise fund for Rhino conservation program. I was told that all these sculptures will be auctioned to raise fund. When I again visited a month later I didn’t find them.

Eternity is a very significant word in Sydney. Word  Eternity is  written in aluminum  on the path at Town Hall Square. It has an interesting story. As told by my guide, word Eternity handwritten was found everywhere in Sydney from 1940 to 1960 for 20 years. Only in 1956, it was revealed that an eccentric man who found peace in religion was writing the word everywhere and it seems it was found in half a million places on wall, footpaths and everywhere.Now, as Aussies say, word Eternity  has become quintessentially Sydney message. During opening of Sydney Olympic, Sydney displayed what this word Eternity means to them by writing it in fire works.